Question - “My players have just moved to the 11v11 age group. I have done some training sessions on the back four and zonal defending, but we keep breaking down. Sometimes players follow the opposition and man mark which destroys our zonal and spacing positioning. How can I help my young players understand their zonal positional responsibilities and stop them from following the opposition players?”

This transition to the 11v11 can be extremely hard to adapt at the beginning as there is much more space to manage, more teammates and more opponents to cope with and many more factors.

And to learn zonal defending is a gradual process as the first thing we learn to wish for in the game is the ball. So now we talk about references on the game which are: ball, space, teammates, opponents, and goals.

Three key points when zone defending:
• The main reference is the space in relation to the goal we are defending, then the ball, then opponents.
• Focus on 1st protect the net – 2nd avoid shots – 3rd keep opponents away from our goal
• If someone leaves their spot to press an opponent, the closest player to that position must cover it and the rest of the group must rearrange the team shape in order close the gaps.

Follow below a good practice for your back four to understand roles and responsibilities.

Setup:
Set up a 50x40 grid and split it into twelve zones. Have four mini-goals at one end and one at the other end. The game will be played in a 4v4 structure. 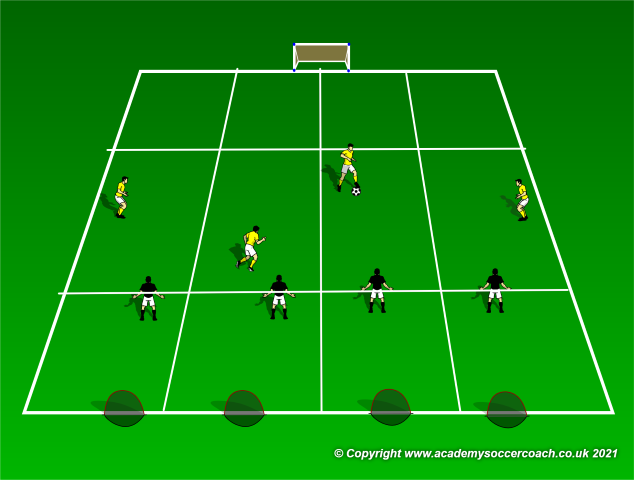 Execution:
The yellow team starts attacking and must not merge to a different lane. The black team starts defending. Each player has their zone and must guard it. When the opponent on their lane gets the ball, they are free to put pressure on and close them down. As this happens, their teammates must quickly read the play and cover the player right next to them, leaving no gaps near the play. 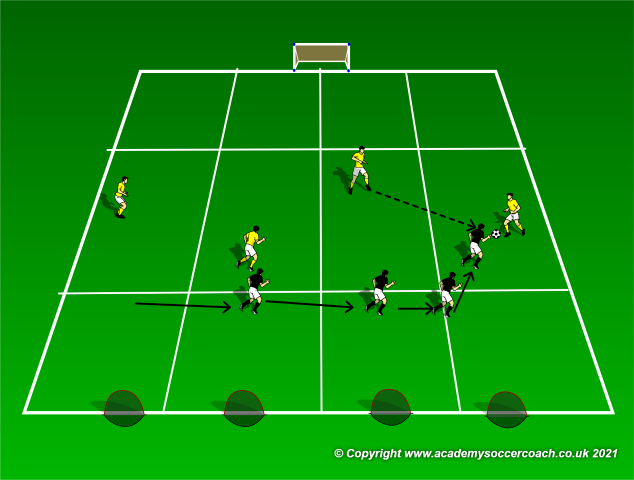 As the ball moves from one zone to another, the defenders must react according to the key points presented above. The arrows’ starting point represent the players shifting sides and closing gaps. 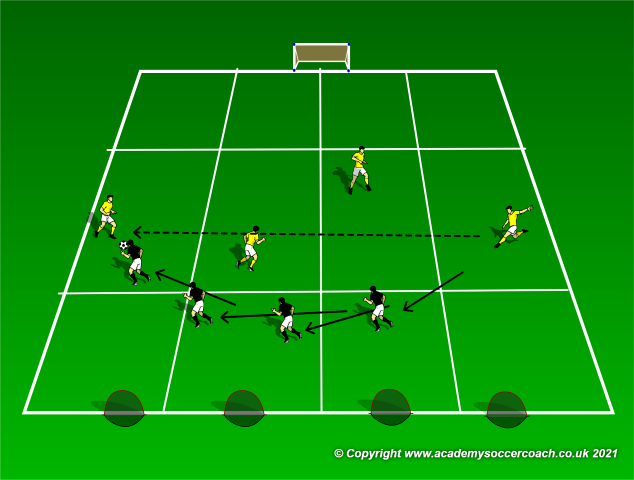 COACHING POINTS:
1. 1st and 2nd defender (pressure-cover)
2. Stay goal-side.
3. Get compact and force them backwards and sideways, avoiding their progression.
4. Pressure triggers: bad pass, bad receiving, opponents have their back to our goals, flying ball.

VARIATIONS
- Add neutrals to overload the defense.
- Attacking players allowed to merge lanes.
- Take the twelve zones out so they lose the visual element.