When We Replaces Me 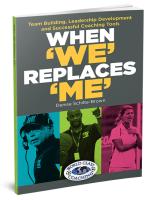 When ‘We’ Replaces ‘Me’ is a book based on a coach’s real life experiences on how to transform a struggling team into winners. Much more than just a story, it’s packed with priceless insights on improving your mindset, leadership and motivational skills.  This book can change your entire attitude towards life, as well as your coaching.

This isn’t a book on drills and exercises, but it’s a book that will help you coach your team to success.

Do you ever struggle to get stubborn, under performing players to follow your instructions? Is team spirit at rock bottom, with egotistical players looking out for themselves and not what's best for the entire squad? In these cases, just changing your drills or formation isn't the answer. You need to change the atmosphere in the dressing room and your players' mindset to change their attitude and improve performance.

When ‘We’ Replaces ‘Me’ is a bit different to the coaching guides we normally publish. There are no drills, diagrams or coaching points. Instead, what you get is a story about how one coach was able to turn a team of embittered malcontents into a dominant force by adding some key principles to his coaching style. It's filled with valuable ideas on how to motivate players and instill them with the positive, selfless mindset they may be missing.

Denise Schilte-Brown played two seasons in the Women’s Bundesliga in Germany as well as the W-League in the United States from 1998-2001 before moving into coaching. She was CAA Coach of the Year in 2001.

Schilte-Brown joined the University of South Florida (USF) women's soccer program. Her energy and enthusiasm had an instant impact, helping the Bulls to their first Big East Championships in her first season. Her players were also successful in the classroom, receiving the NSCAA Team Academic Award for eight straight years.

Denise and her husband, Chris, have twins named Ethan and Kenza. She has an M.S. in sports administration and management from Virginia Common Wealth University, a USSF “A” coaching license, a director of a U.S. National Training Center and holds UEFA “B” Coaching Badge.