This is the first time I've coached a team with two players that think of themselves as full-time goalkeepers. We came to an understanding before the season began as to how playing time would be divided. We also decided which events they would have a chance to play on the field when they were not in goal. In other events they would play one half in goal and not play in the other half.

This has worked well in large part because everyone has known what to expect and there have been no surprises. I also think it has been very good for both goalkeepers because there is an element of competition that is usual among field players but doesn't often happen with goalkeepers because a youth team usually only has one. They are aware of how the other goalkeeper is doing in a exercise or game and they push themselves to be as good or better. This is in spite of the fact that they  have had strictly even playing time up to this point. They know that there will come a point in the season, around the time of State Cup, that the goalkeeper that has proved themselves to be more consistent will get to play more in important games.

One of the keepers had never played on the field before this year and that opportunity has not only helped her with her foot skills but also taught her the game from the perspective of a defender. She has grown in confidence to the point where she looks like she belongs as much on the field as she does in goal.

Having two goalkeepers has helped the team in a number of ways as well. It gives us a sense of security because we know if one of the goalkeepers picks up an injury the other one is there to take her place instead of having to use a field player. Fortunately, both have remained healthy but in a long year of competition I would expect one to be out for a game or two sooner or later. The greater benefit has been in training. Having two goalkeepers makes for more realistic and competitive exercises and small-sided games. With only one keeper, the team she is on has a distinct advantage over the team that has to put a field players in goal. This also takes a developmental opportunity away from the field player because she is practicing something she would almost never do. 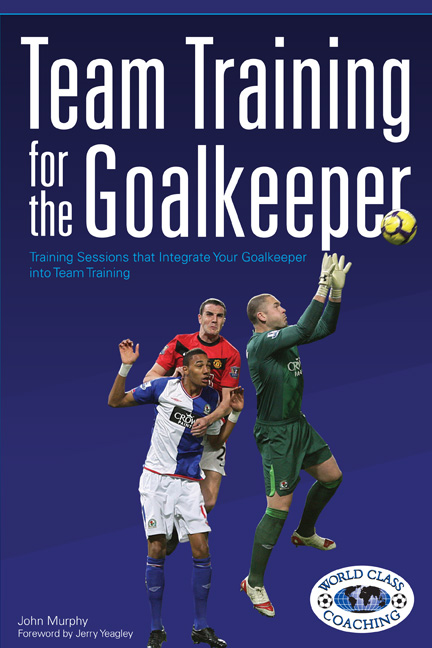 I've enjoyed incorporating specific sessions aimed at the goalkeepers into our practice routine. The book, 'Team Training for the Goalkeeper' has been an excellent resource for me to find sessions that benefit the team but especially the keepers. Here are two small-sided games that we've used with a lot of success.

Coaching Position: Behind the goal

Coaching Position: Behind the goal or wide of the exercise to see starting positions, decision making and recovery movements

Do your teams usually have one goalkeeper or two? At what age do you think having two makes sense for the goalkeepers and the team?