The importance of building out the back, not only as a tactical necessity, but as a technical one has increased in recent years, and therefore coaches need to have either a singular system in place so players know their roles, or one that is flexible and allows the team to manipulate whatever look the opposition gives. This will depend on things such as coaching philosophy, age level of players, and their game knowledge. Ultimately, the way you structure your build out will be determined by your style, system, and personnel but here are a few suggestions on how to shape your build out. 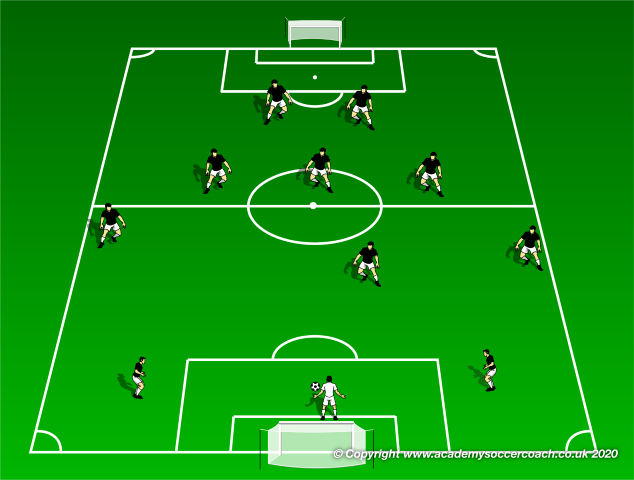 In this shape we have the center backs split out wide playing low. This ensures that if they are to receive the ball they will have ample time and space to play out since few strikers will look to press that deep. If the strikers do push that high they will either leave a huge gap between them and the midfielders or the rest of the team will push up with them meaning there will be huge gaps behind the entire team. The fullbacks are pushed high since this will spread the opposition midfield and force them to either split out wide to deal with the fullbacks or leave their wings vulnerable. The central defensive midfielder should start deep and then drop in to give the goalkeeper a short third option and then play on the half turn to connect with the midfielders and fullbacks. The wingers are pushed in to provide additional numbers for the center of the pitch. They have a duel role of providing outlets for the center backs, fullbacks, and CDM and increasing the chances of winning an aerial duel if the ball is played long. The strikers provide the depth in the system and force the opposition’s defensive line to play deep and not be able to provide help in the center of the pitch. 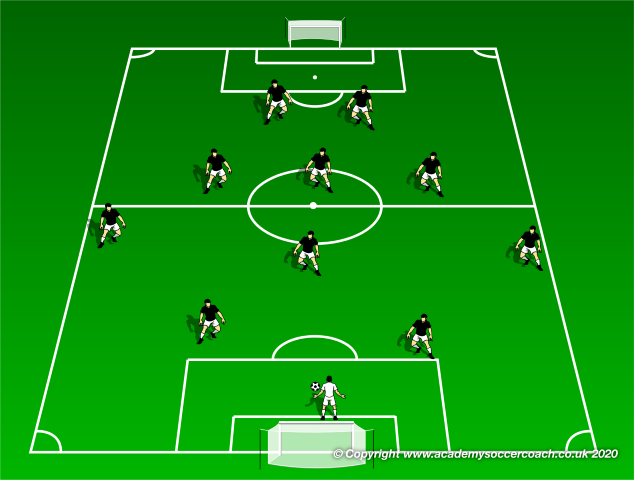 Pinched Center Backs
This is more or less the same concept for everyone except the center backs. The ball here is more likely to go wide to the fullbacks as the strikers will have pinched to deal with the center backs. If the opposition strikers choose not to press and drop off towards the midfield it does move the center backs closer to the opposition goal, while also putting them in a closer position to cover for each other if a mistake is made in the build up. 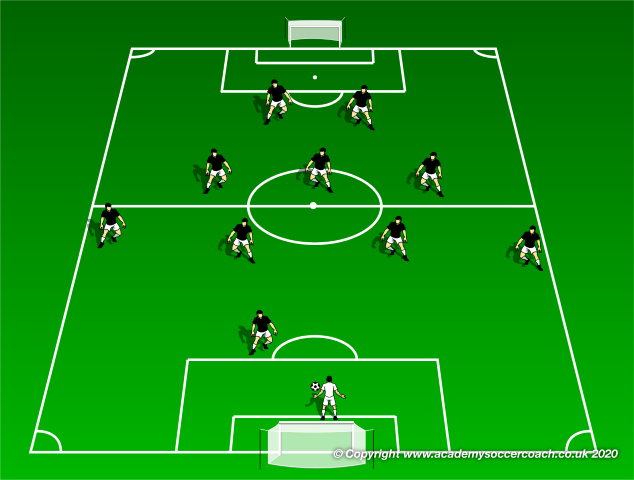 One Outlet Center Back
This look is more useful if the opposition looks to play in a low block and does not press the outlet pass. It also allows for more flexibility. With one of the center backs pushing up to become a second center defensive midfielder that means that one can stay high and the other can drop in to be a second outlet pass if need be meaning it will be difficult for the opposition center backs to track their late runs as they will have to read who is going and who is staying high. If the single center back does receive he should have decent time and space to play an accurate pass forward since the numbers forward will either take advantage of the opposition dropping deep or force them to do so.