Play the Wings Out

I wrote an article on “ funneling” as a defensive system to use when playing a superior opponent. The funnel shape, a 4-3-2-1 was used to fall back into after an attack to hold the middle and bait the opponent out wide before pinching them in on the line. Funneling is great against an opponent who will try to play out wide quickly anyway. However, against teams which posses out and set up quickly in your midfield, funneling is less effective. In these cases, I have found using a traditional 4-4-2, with some specific attacking rules, does the trick. As shown below, the yellow team has come out with the ball under control against a black side who is essentially “parking the bus” just outside the box. 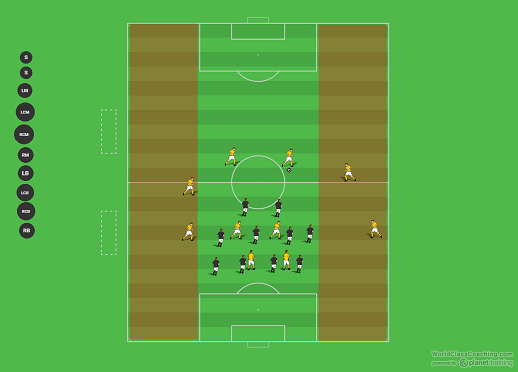 As the arrows below show, the black side has some defending advantages and should be able to win the ball both out on the line or inside if the yellow team attempts to play in on the ground. 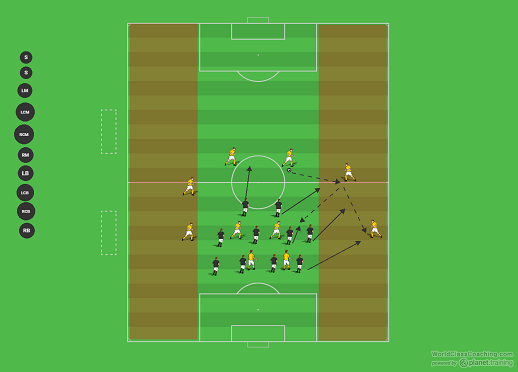 This is where the “rule” comes in. If the black team wins the ball, the safest attacking space is right in front of them up the line. This is also where quick, direct movement out will give them a numerical advantage. Remember, this is for playing a better opponent and turning the ball back to the center places your side right into their numerical advantage ( shown below as a 7 v 5 for yellow). 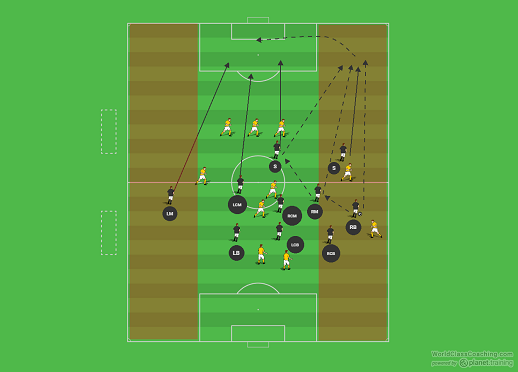 The concept is this simple: Win the ball on one side, play directly up that side and don’t center the ball unless it’s a cross. As the diagram below shows, near and far post runs with a “cleaner” at the top of the box are the only players required to finish a good service. 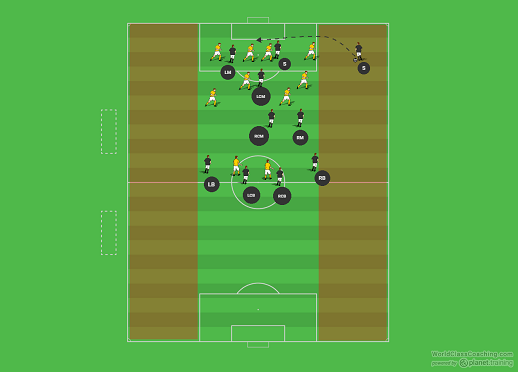 Good recovery angles back into the 4-4-2 central shape and there will be little opportunity for a quick counter ( diagram below). Your side will give up some possession and have to defend some crosses , but I have found most of the battles between a strong defending side and a strong attacking side come down to mistakes made in the middle of the field. Help your team avoid this by not playing the game there, especially against a superior side. 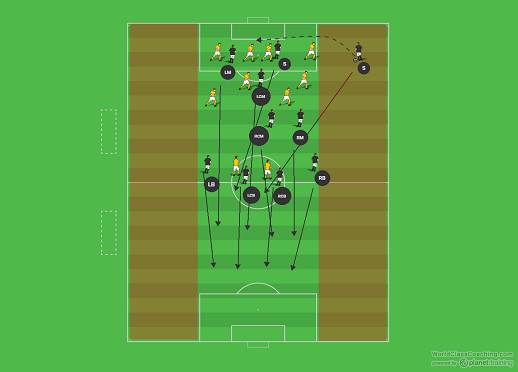 Here is a great way to help your team implement this concept.

Set Up
Set up two cones at the intersections of the circle on the half line ( as shown ). Place another cone out on the line to the right approx. 20 yds up the field. Move up another 15 yds and place a final cone in line with the corner of the penalty box. Place players at each of these cones. There is a keeper who will defend any shots or crosses but must stay in the goalie box. 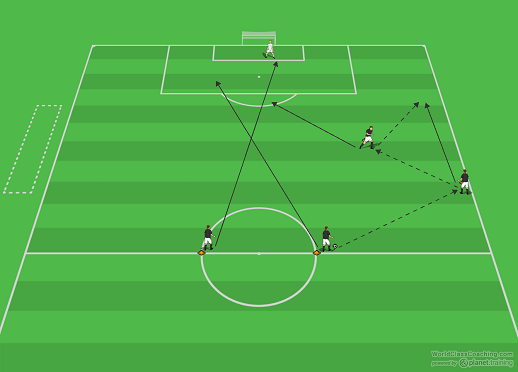 As the progression above shows, the players work the ball out and up the line for a service to a near post, far post and top of the box run. For this exercise, the player receiving the service must finish it for a goal to count. 4 players rotate in each time and alternate keepers may be trained during this exercise either rotating every time or after a set number of attempts. 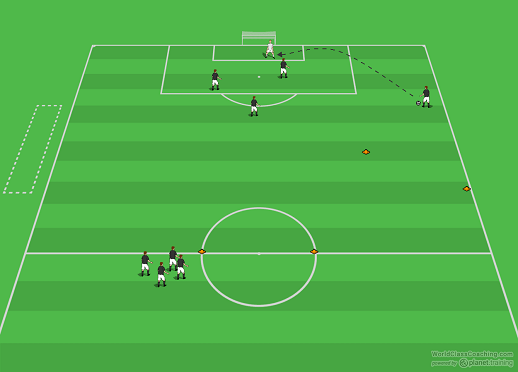 Once the players get into the flow, allow two defenders to drop in from the corners of the goalie box once the service is hit. 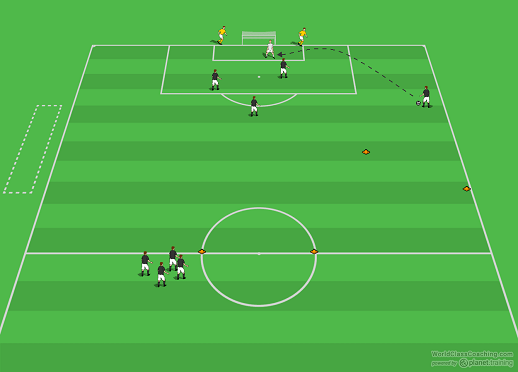 Coaching Points
The idea here is to quickly play the ball out and up the line for a service to 3 attackers, that’s it. While there are ample opportunities to work on other parts of the game (keeper coaches are free to here ), the main focus is a quick outlet and accurate give and go up the line for the service. The ball shouldn’t stop, the players shouldn’t hesitate, it should be very mechanical and fast.