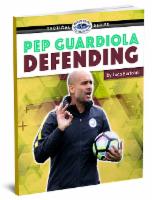 Pep Guardiola's Manchester City conceded just 27 goals on their way to winning the 2017/18 English Premier League Championship. This guides shows why their defense was well organized and tactically sound

Here is what you will find in this book:

Pep Guardiola is the world's number one coach his teams win championships wherever he goes. His teams dominate possession and concede fewer goals than any other team. Guardiola has single handedly revolutionized soccer at the highest level. So much so that other top teams and coaches are attempting to copy his style and tactics.

Pep Guardiola Defending takes a look at the defensive tactics of Guardiola coached teams so that you can use the same tactics with your team.