Warm up’s for all players is vitally important for match day preparation. As well as having the body prepped it is important to have the mind warmed up. Keepers are often sacrificed in the warm up for the sake of the outfield players having an opportunity to score resulting in an unwarm and demoralised Keeper.

I start the Keeper with the rest of the team for dynamics and then we often go in to a tactical game of handball or small sided games. After 5 mins of the game I take them out and work one on one.

I start off passing a ball from just 6 yards out, right foot left foot passing and trying to one touch. This looks simple but it gives the Keeper and opportunity to test the 6 yard box and see where the ball can bounce or change speed. I then move back to 12 yards and then 18 yards. The further out I go the more touches allowed. We try to work a max of three. Once on the edge of the area I encourage the Keeper to float the ball to me at more of a height.

After handling warm up I like to work the Keepers angles. For me this is very important. This drill can be made as difficult as you like but I always start easy and for me is more of a mental preparation thing. It allows the Keeper to get their bearings. 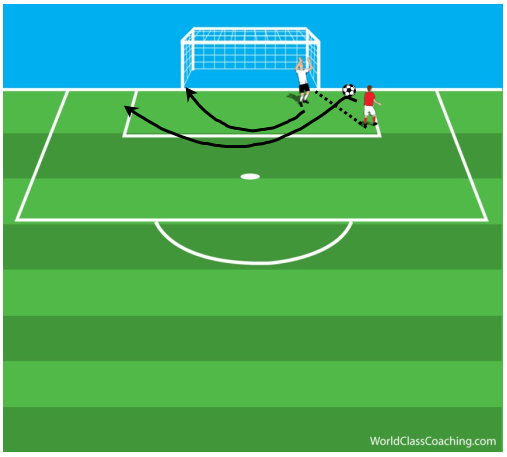 Starting at the front post throwing the ball at different powers and heights. As the Keeper catches it they throw it back and you sidestep across the six yard box, as soon as the coach has the ball release for the Keeper to make another save.

I then move on to crosses. Starting off at the by line aim crosses for the Keeper to meet the ball at the edge of the six yard box. Then, remaining out wide in line with the edge of the penalty area, crossing to aim to make the Keeper collect between six yard and penalty spot. And then just inside the half way line, again aiming around the penalty spot. I do this both sides and three times at each point. 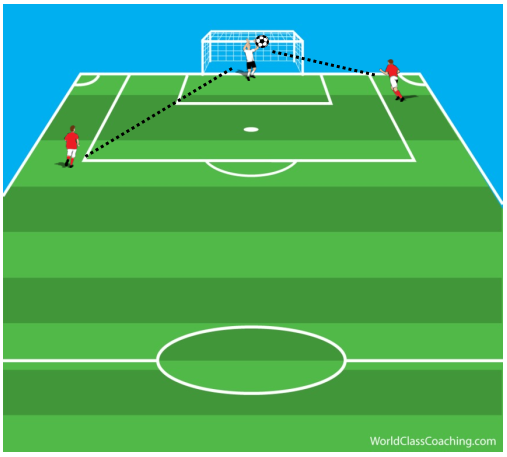 Once the keeper catches the ball it’s a good time for them to practice distribution. Rolling out when the coach is closer and over arm throwing when coach is further away.

After crossing I move on to drop kicks, goal kicks and back passes. The first two are very straight forward and involve a static keeper distributing to the coach. The coach should be out wide and far away enough to be realistic and challenging. Starting closer and moving away as Keeper gets more comfortable. Back passes I put a cone square wide and deep up the pitch as a target for the Keeper. Coach passes the ball from the end of the area and then follow in playing as an attacker. Keeper must raise the ball high and hit the target. Do three on the side the ball is passed in and three switching play. Again I tend to do three of each on both sides. 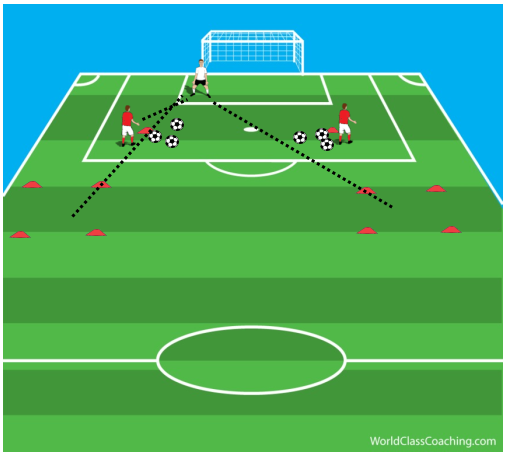 Finally I give the keeper a few dives. Nothing to strenuous, this isn’t training. Just a few diving saves on the left and the right. Full speed but not full power.

After the final team talk when the Keeper comes out I’ll have a few cones for them to do quick feet through.

This is simple warm up but helps focus the Keeper. I often repeat this drill every week as Keepers like most players usually like familiarity.