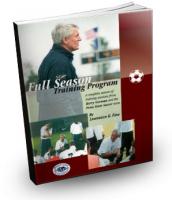 This one-of-a-kind book shows every training session, practice and drill of the Penn State Soccer Team from their 2001 season when they reached the NCAA Tournament round of 16. The book starts with the usual two-a-day pre-season sessions, continues with the regular season training and concludes with training sessions from the post-season. Inside you will find observations of over 80 training sessions accompanied with over 150 easy-to-read diagrams of every drill and exercise.

This is a great opportunity to learn from one of the country's most respected coaches. Barry Gorman is the 2002 President of the National Soccer Coaches Association of America (NSCAA). Gorman, a member of the NCAA Division I Soccer Championship Committee and chair of the NCAA Mid-Atlantic Region, is a licensed "A" coach with the United States Soccer Federation and the Irish Football Association. He also is a national staff coach for the NSCAA Coaching Academy. The president of the Pennsylvania Soccer Coaches Association from 1980-84, Gorman was inducted into the Pennsylvania Coaches Hall of Fame in 1999.

Gorman has been the Penn State Men's Soccer Coach since 1988. During that time they have appeared in nine NCAA tournaments, reaching the quarter-finals in 1999, a year where they also enjoyed four weeks at the top of the national rankings. His record with the Nittany Lions is 191-95-20

Over the years, Gorman has visited many countries to study and learn from the world's best soccer clubs and coaches. He has brought concepts and strategies from Holland, France, Spain, Brazil, Argentina, Switzerland, Germany, England and Ireland, which adds an international flare to the Penn State soccer program.

Coaching championship teams is a challenging and sometimes arduous task. I have known, worked with, and competed against Barry for many years, and his knowledge of the game is unsurpassed. Coach Gorman is not only a great coach, but also a gifted teacher of the game and how to coach it.

This book is a must for any serious soccer library. From start to finish you will find valuable information on how a season unfolds and how as a coach we can respond. Barry brings all of his experience and knowledge and has done all a favor by sharing it with all of us in this book!