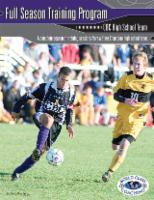 In this book, the nation's winningest high school coach, Terry Michler, shares the secrets, methods and tactics he uses to make the Christian Brothers College in St. Louis, one of the most successful high school programs in the country.

Inside you'll find a full season of the actual sessions that Michler used with his team. The practice sessions revolve around decision-making, repetition, 4 v 4 small-sided games, pattern play and attacking schemes that will allow for a fast-paced, free flowing style of play. Michler also shares his insight on how he put the training schedule together and notes from each of the games they played. This information will give the reader a comprehensive look at how Michler developed a high school powerhouse over the course of the year.

Each session includes many exercises and small-sided games that you can incorporate into your training session, which will help develop your players into an organized disciplined team.

Terry Michler played in the North American Soccer League for the Kansas City Spurs who won the league title in 1969. During his time as coach of Christian Brothers College, he has compiled a record of 721-178-88. His teams have won 22 District Championships, 15 Final Four appearances, 11 State Final appearances and 5 State Championships. 266 of his players have gone on to play college soccer and 32 have played at the professional level.