Counter Attacking in the Modern Game 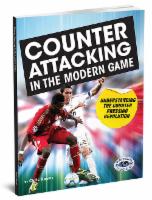 Calling all sideline generals! If you’ve ever imagined yourself to be a general on the sidelines marshalling your players like troops, you’ll love this book on Counter-Attacking. Inspired by Sun Tzu’s ‘Art of War’, Counter-Attacking in the Modern Game gives you the tactics, mindset and drills to create a team that beats even the most technically gifted teams with the ferocity of aggressive counter pressing.

What’s the best way to beat a team that’s got better technique? Hoping strikers get on the end of a long ball? Shutting down advancing players as fast as you can? Or being smart and using your opponent’s technique against them by counter pressing?

You only have to look at how the technically gifted Spanish sides were defeated by the brutally efficient German teams in previous European Champions Leagues to know that tactics overcomes technique. It’s the teams that know how to wait and counter press that can regularly beat much more skilled opponents.