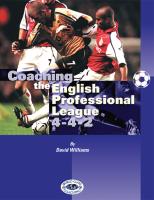 This book will explain how the 4 - 4 - 2 formation is played, why it is so successful and why it is the formation of choice for the world-s top teams. Author David Williams explains the roles and responsibilities of the defenders, midfielders and forwards both in attacking and defending situations. He describes many practices that he has used during his vast coaching experience in the English Premier League that will show you how to train your players to play using the 4 - 4 - 2 formation. These practices start with 2 v 2 exercises and build all the way up to 11 v 11 conditioned games.

This book explains the different ways the 4 - 4 - 2 formation is played by Manchester United, Liverpool and Arsenal, the three giants of the English Premier League. For instance, he shows how the fullbacks at Manchester United play differently than those at Liverpool and how the midfielders at Arsenal play different roles than the midfielders at Liverpool. These, and many more differences are explained throughout this exceptional book.

This book is a must for any serious soccer coach.

Author David Williams has extensive coaching experience in the English Premier League, coaching at Leeds United, Everton, Norwich City, and most recently with the Manchester United U19 team. Williams also has experience in the international arena as the assistant coach of the Welsh National Team.