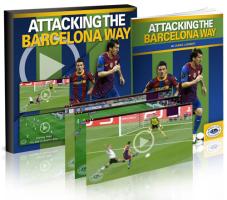 If you're looking for tips on how to goals, you're in the right place! Attacking the Barcelona Way is a unique video series that analyzes actual game footage to explain exactly how Iniesta, Xavi, Messi and Barcelona’s other star players are able to run rampant in front of goal. With an eBook of appropriate drills and small games also included, Attacking the Barcelona Way is your blueprint for bringing flair and creativity to your front line

If your team is struggling to find the net and lacks creativity in front of goal, there is no better team to look to for inspiration than Barcelona. During Pepe Guardiola's reign Barcelona won 14 trophies in just four years, while under their new manager, Tito Vilanova, they went on a run of 23 games with just one loss, during which Messi scored 34 goals on his own. Now you can discover exactly how Barcelona are able to score so freely, with moves that slice through opposition defenses like a hot knife through butter.

Attacking the Barcelona Way is a special video series that provides in-depth analysis on how Barcelona is able to score so frequently. Unlike our normal videos, Attacking the Barcelona Way uses real game footage with expert technical analysis to explain how Barcelona's players position themselves for the attack, the moves they make to get into space and where they pass to punch through defenses like through a paper bag.

Click here for more info on Attacking the Barcelona Way and to see what other coaches are saying.