A New Model for Game Speed in Soccer

In today’s club system it seems like every club has a different system or philosophical approach to player development.  Some focus on the technical development model in which they create aggressive, attacking players who have great “foot skills and confidence” taking players on 1v1. Other clubs focus on recruiting fast, powerful players that excel in their “kick and run” style. These players seem to take advantage of tactical mistakes, countering with long balls played over the top, in which their players simply out run the opposition for easy finishing opportunities. And some clubs stick to a style based on “possession and ball control”, spreading teams out with fluid, rhythmic movement looking to take advantages of mismatches and seems in the defense.

This post is not meant to question these styles, and at the SoccerFIT Academy we feel that each model has it’s advantages. But from a youth player development perspective, we feel it is important to provide each player with a very broad and stable foundation that can fill in any developmental gaps created by a clubs tactical philosophy.

To provide a clearer picture as to what this might look like, we use our pyramid of soccer mastery model and lump players into 3 general categories: 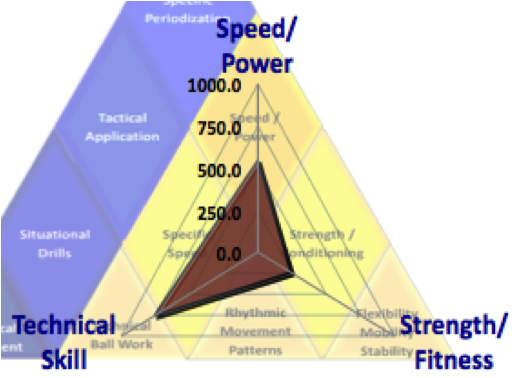 As seen in the picture (Category 1), this player is very strong in their technical skill, and is also fairly fast and powerful, but this type of player tends to be slightly weaker and less fit than their opponents. This weakness is exposed as the player is matched up against stronger, bigger and more physical opponents, or if the game turns into an up and down the field track meet. These players fade fast and can give up goals late as their opponents simply overpower or outlast them over the course of a game. 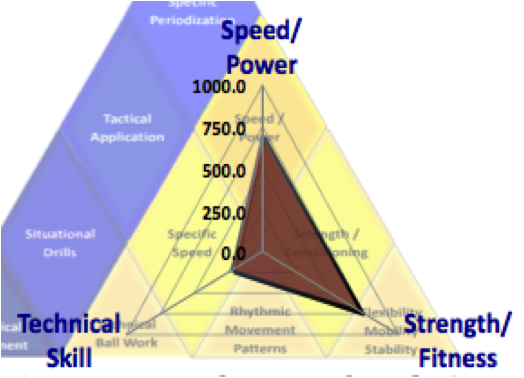 This type of player is very athletic. Strong, fast and very physical, they use their size and speed to wear down an opponent over the course of the game. These players fit in very well in systems where the goal is to out run their opponents. These types of players tend to do quite well in most youth systems because they dominate on athleticism alone, and at the younger ages, many players don’t have a high enough soccer IQ to counter this style of athletic play, as it takes years of exposure to situations to learn and develop an intelligent style of play. 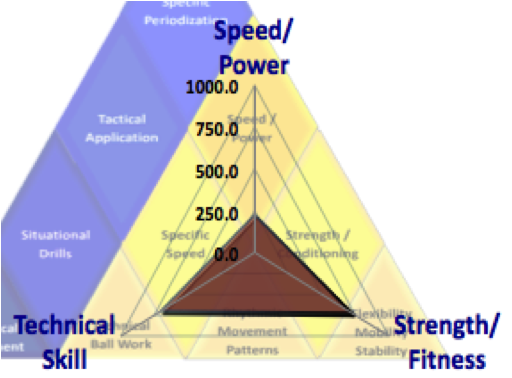 This type of player has a great base of fitness and a solid understanding of technical / tactical application. They are smart enough know their strengths and technically skilled enough to maintain possession and control. However, these players are typically not fast or powerful enough to take on player’s 1v1 and seem to have trouble applying their skill against fast, aggressive competition. Instead they try to keep possession of the ball, outlasting a less fit opponent, and take advantage of tactical mistakes made by the opposition.

So which system is the best? What type of player profile should we be creating? Who do you want on your team?

The answer is not that simple and the type of player you’re looking for really depends on the system you run. The best scenario would be to have a very balanced mix of these players, tactically smart distributers, strong and powerful enforcers, fast and skilled attackers and players that are confident enough to take the ball through a defense and finish when no one else will.

So how do we fill in these gaps? How do we broaden the foundation of the players we have? How do we develop weaknesses to become strengths?

First we need to understand what type of player we have, and then we can progress. We have created a testing system that assesses player development within each of these three categories from year to year. The first level (Level 1) of this system allows us to assess their comfort with the ball, their body control and ability to change pace and their fitness level in regards to their ability to last an entire game. In the next level (Level 2) we are able to assess their confidence and skill in attacking, distributing and finishing situations, their raw strength and game fitness (or their ability to recover from intense bouts) and their speed and agility.

Finally in the last level (Level 3) we are focused on the outcome. Can you finish? Can you win balls in the air? Can you shut down an opponent in 1v1 situations? We also break down the more physical aspects into tests that give us insight into how that player can improve. For instance, lets not just test the beep test as a gauge of fitness. Instead, lets look at the athlete’s ability to repeat their max speed and recovery their heart rate. Lets look at their reactive ability (reacting to players, reacting to the ball, reacting with the ball against other players). Let’s look at their strength in regards to explosive potential, not just how much they can lift. Let’s instead look at how they are able to take advantage of the strength they possess. Are they strong in the weight room, but not strong on the field? Are they powerful in the weight room, but can’t win balls in the air?

The specific tests are not as important as the ability of those tests to identify a weakness. Over the next few articles we will be discussing some of our tests to show how we take a Category 2 player and build off of their strengths (speed and power) as we substitute our plyometric program for quick foot drills around a ball. These players already posses the physical base to be quick, but lack the technical base to use it effectively.

We will show how we take a Category 3 player who already has the physical and technical foundation and demand more speed, power and skill. We will show how we can change the session slightly so that they learn how to play at game speed. We will also show how we can take a Category 1 player who plays fast, and add some additional strength and conditioning work that builds off of their athleticism to teach them how to play stronger.

I challenge each of you to look deeper into your programs philosophy and objectively assess your ability to develop your player’s weaknesses. To create a well-balanced team system that is built around player development, we need to assess first and then objectively integrate the missing components.